The 5 most famous chefs in the Middle East

Discover the profiles of 5 of the most famous middle eastern chefs in the world! You will be amazed by their wonderful career path, their international reputation on social networks or their prestigious awards! Get to know Chef Izu Ani, Nusret Gökçe, Burak Özdemir, Akira Back and Vineet Bhatia. Read more about these amazing men here!

We are thrilled to introduce you to 5 incredible chefs who are shaping today’s outstanding gastronomy. Get ready to travel to the Middle East with us to discover what makes this fascinating part of the world a wonderful place of culinary flavor!

Let’s go for a bit of oriental culinary culture.

The famous chef Izu aims to share an experience with his guests and allow them to understand and love what they are eating. He grew up in London but was very attracted to the world of gastronomy and traveled to France to discover Nouvelle Cuisine, which influenced his culinary style and encouraged his taste for French flavors. He had worked in renowned restaurants such as Arzark, Mugaritz, and Akelarre. It was in 2010 that Chef Izu was offered the opportunity to move to Dubai to launch his French restaurant La Petite Maison. In recognition of his talent, his restaurant was ranked among the top 100 restaurants in the world less than two years after its opening! Izu launched YSeventy7, his own creative management, and consulting agency, specializing in the food and beverage industry and many other popular concepts such as GAIA, in partnership with Evgeny Kuzin, Carine, Zhe Lighthouse, Izu Brasserie & Bakery, Sum+Things in Riyadh and Izu Restaurant, Mandarin Oriental, Doha. With his numerous restaurant concepts in UAE, Saudi Arabia, and Qatar, the chef was recently awarded a UAE Gold Visa for his dedication to the restaurant industry. This allows him to have a 10-year renewable visa in the UAE! 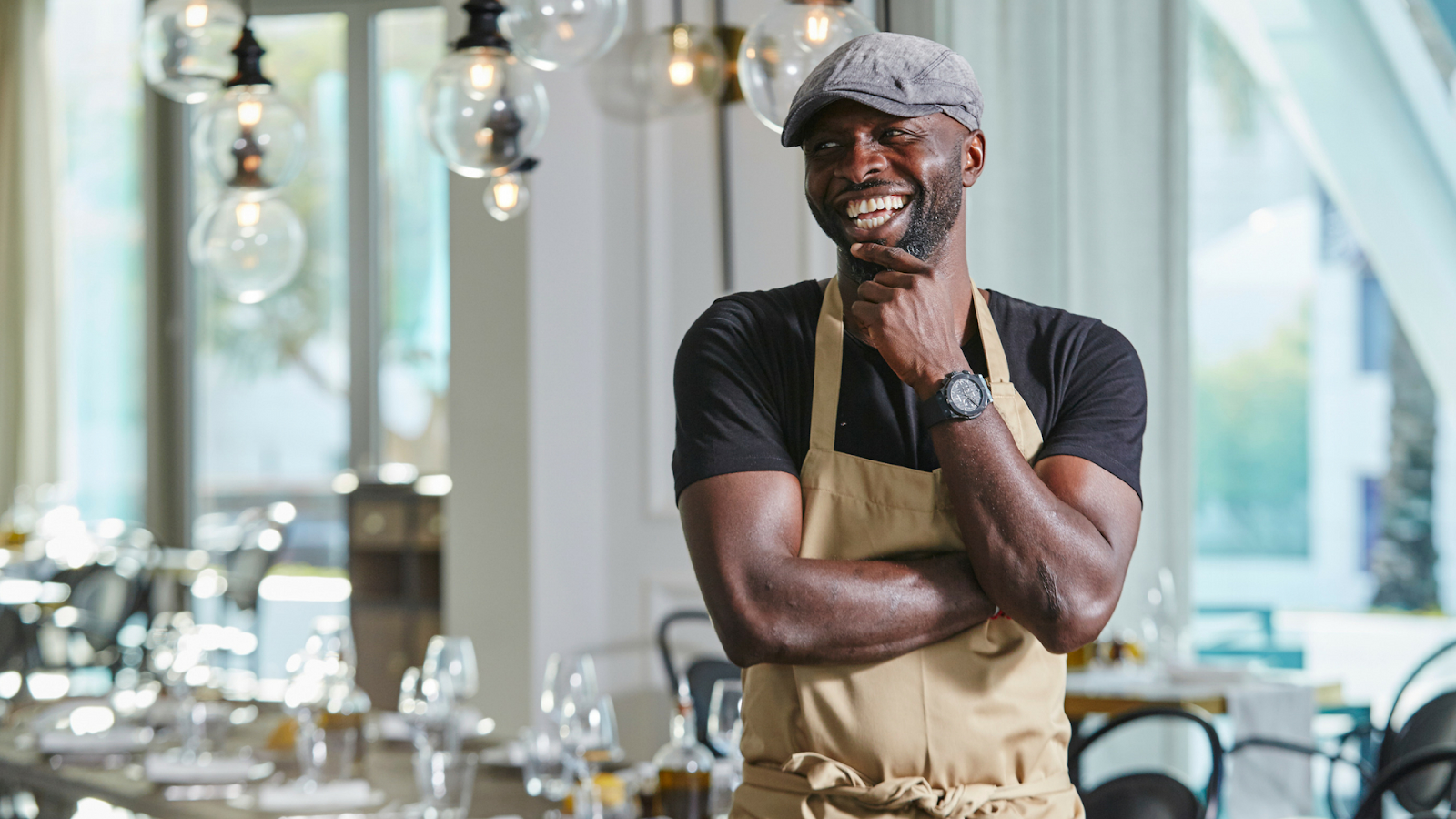 Even if you are not a big fan of social media, you can’t have missed the phenomenon of Nusret Gökçe commonly known as Salt Bae. Of Kurdish origin from Turkey, he was born in 1983 and is basically an apprentice butcher in the Kadikoy district in Istanbul. After trips to the United States and Argentina inspired him, he returned to Turkey and worked in local restaurants for free to gain experience in the restaurant business. In 2010, he opened his first restaurant Nusr-Et, a chain of steakhouses in Istanbul. He became famous for his viral meme but also his technique of preparing and seasoning meat by sprinkling salt in a special way on delicious-looking sliced meat. He has two restaurants in Dubai and one in Abu Dhabi. Nusr-Et first opened in Istanbul, before opening the second at the Four Seasons Resort Jumeirah. Since then, the social network star has not stopped his growth, he recently opened a burger restaurant at DIFC. His fans, including celebrities, usually flock to take salty selfies with the man himself. 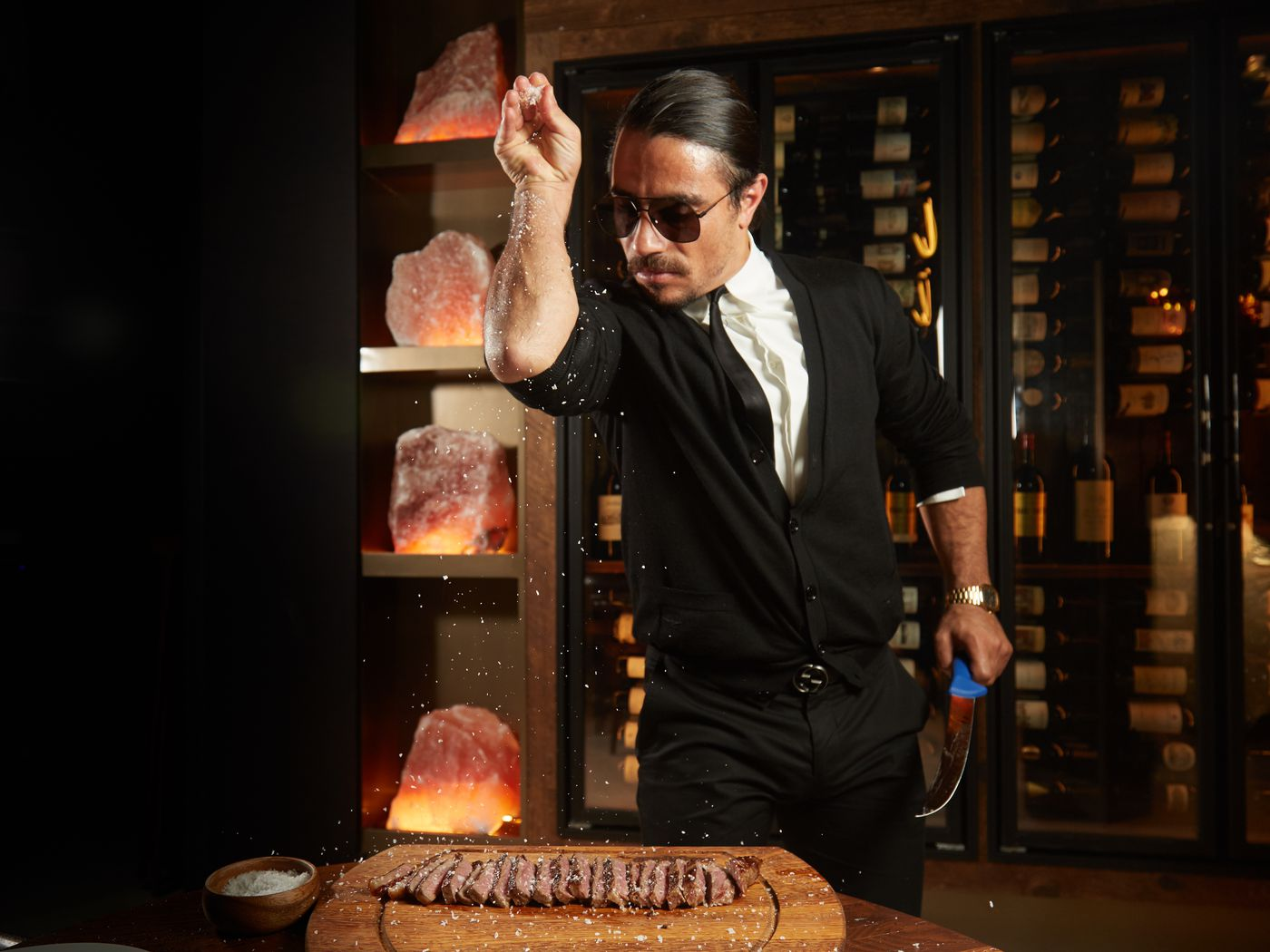 Burak Özdemir, nicknamed CZN Burak, was born in 1994. He is a Turkish chef and restaurateur, owner of the Hatay Civilizations Table restaurant chain. His famous chain has a total of five branches: Taksim, Aksaray, Etiler, and foreign branches in Dubai, the Kurdistan Region, and Tajikistan, CZN. His preparation and presentation of Turkish recipes while almost always smiling at the camera has charmed the world and made Özdemir an internet celebrity on platforms such as Instagram and TikTok. His cooking videos reach millions of views on the net and he is also followed by millions of people while under 30 years old! He has become so popular that the Crown Prince of Dubai, H.H Sheikh Hamdan bin Mohammed bin Rashid Al Maktoum, regularly dines at his new restaurant CZN Burak in central Dubai, and has even awarded him the Royal Seal of Approval! The opening of CZN Burak was certainly celebrated with great fanfare. An image of the CZN Burak chef was projected onto the Burj Khalifa over the weekend, with the words “Welcome to Dubai” and the date of the restaurant’s opening. 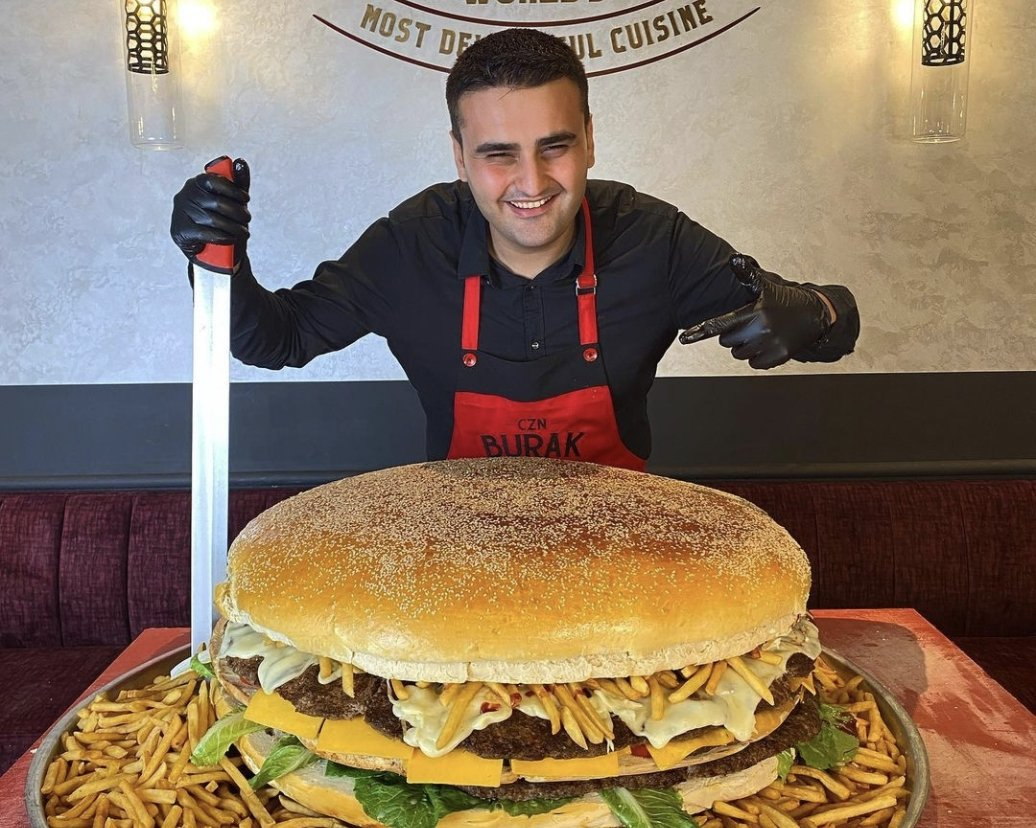 4. Akira Back - AKIRA BACK DUBAI

Akira Back. 48, was born in Korea and raised in Aspen, Colorado. The chef hated cooking and was even a professional snowboarder, which predestined him for a very different fate. He got his start in this world after meeting a restaurant owner in the United States who offered him a job because he needed money. Through har work and meetings, he finally fell in love with cooking, which gave real meaning to his professional life. Back quickly became one of the youngest executive chefs in existence before opening his famous Yellowtail and Kumi restaurants on the Las Vegas Strip. After this success, he decided to bring a new sense of adventure and creativity to his culinary creations by opening his eponymous Akira Back restaurants in Singapore, New Dehli, Jakarta, and Dubai. Akira even recently received a Michelin star for his latest concept, Dosa, which is open in Seoul, Korea. The foodie star draws the world to his Dubai restaurant as he offers his own version of Japanese cuisine, prepared with Korean and international flavors, using seasonal produce and artisanal ingredients, and this while being located in front of the most breathtaking view of the Dubai skyline. 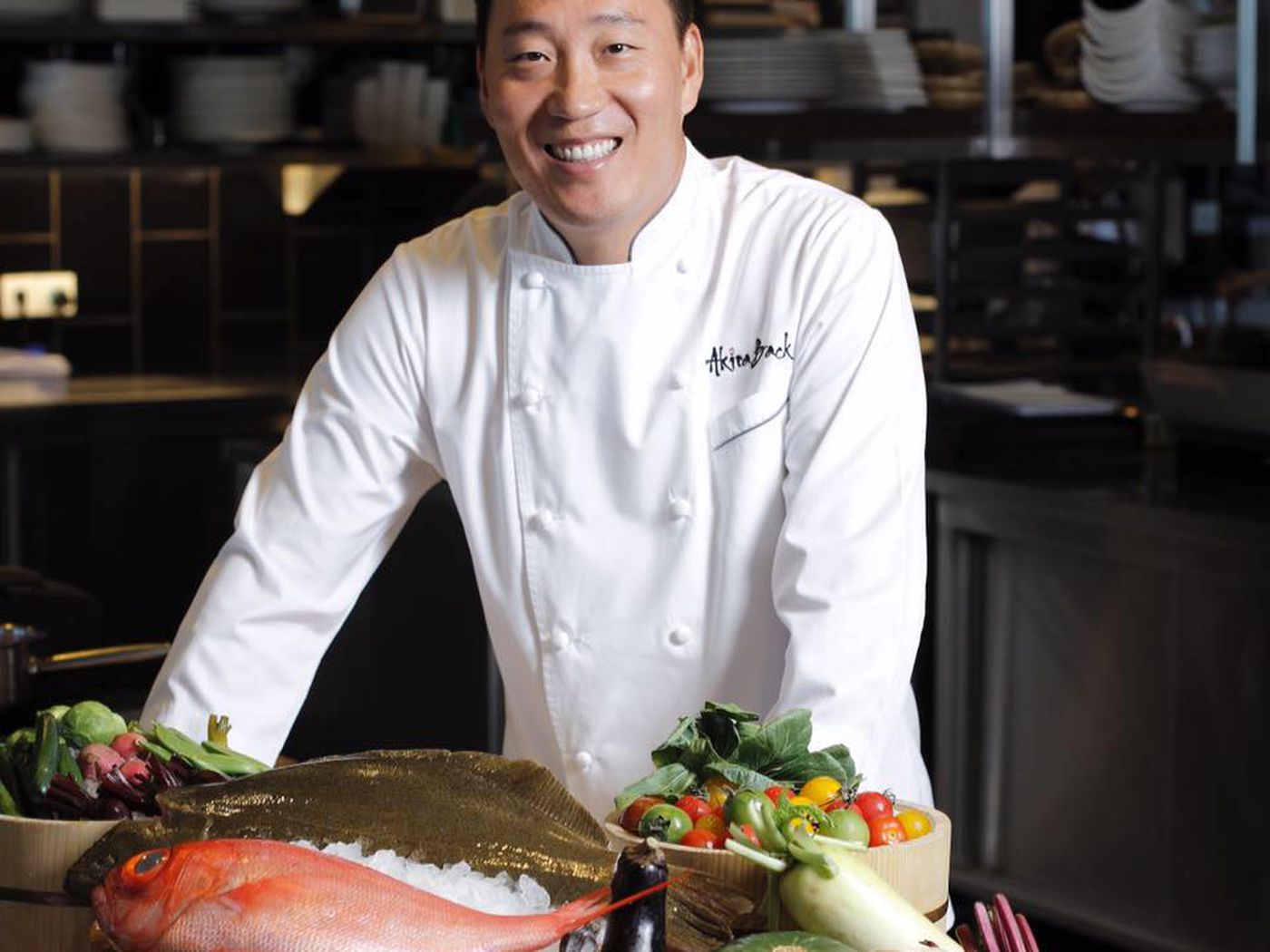 Indian chef, restaurateur, author, and media personality Vineet Bhatia was born in 1967, He is the first Indian chef of all time to receive a Michelin star. He opened two Rasoi restaurants, the first in Chelsea, London in 2004 and the second in Geneva, Switzerland in 2008. Both restaurants received Michelin stars in 2006 and 2009 respectively, making Bhatia the first and only Indian chef to receive two Michelin stars. The chef surprises us with his incredible ideas and creativity, and this is what makes us dream: in June 2018, he embarked on a trek to Everest Base Camp to set up a “pop-up restaurant” for ten lucky guests who arrived by helicopter, In December 2019, he prepared a gourmet Indian meal every day aboard the French cruise ship Ponant with chef Alain Ducasse’s team for a ten-day crossing to Antarctica. In Dubai, his two wonderful restaurants: Indya by Vineet and Indego by Vineet are all the rage and people come from all over the world for the privilege of inimitable experience and signature style. Chef Vineet invites his guests to discover his vision of India in his fragrant and colorful dishes. In 2021, Vineet was named culinary ambassador for GREAT Britain & Northern Ireland campaign. He owns eleven restaurants in total and appears as a judge on the Netflix show The Final Table and as a judge-host on MasterChef India. He has written two cookbooks, Rasoi: New Indian Kitchen and My Sweet Kitchen. 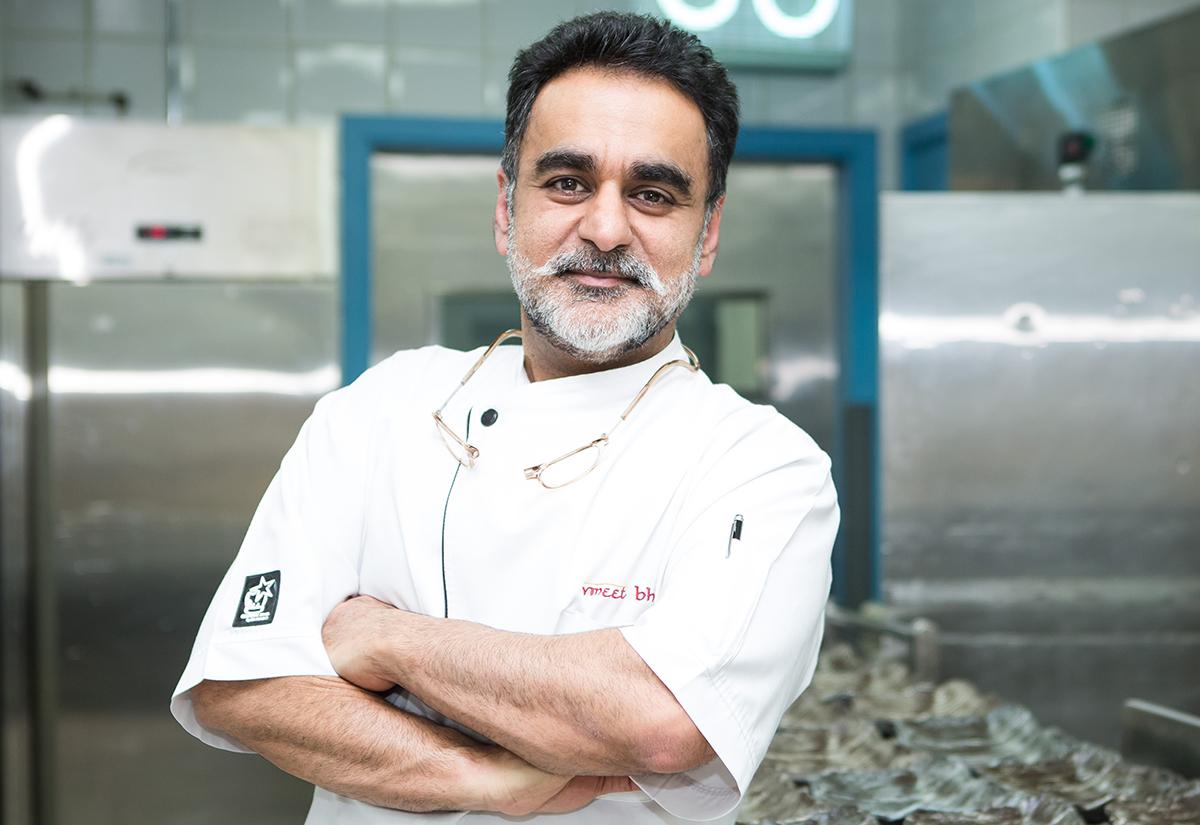 We hope that this reading has inspired you and that such incredible chefs make you dream big. You can also achieve great things by developing your career in the hospitality industry. If you are looking for a job at some of the most luxurious hotels or Michelin-starred restaurants in the USA, Europe, or the Middle East, Placement International can help you. Indeed, we are specialized in the Hospitality sector and we provide placement opportunities, paid internships, management training programs, and employment in the most luxurious hotels and restaurants worldwide. Furthermore, we provide visa-support services and stand by your side to ensure that you enjoy your adventure!

The best of the Michelin Guide 2021

Where do Easter traditions come from?

All you need to know about US visas
382
Cosmina Bradea