Opportunity for Foreign Workers in the USA

Prior to COVID-19, US restaurants and hotels already had a significant labor problem, commonly referred to as the "talent crisis" or "war for talent." The unemployment rate was at its lowest level in five years and minimum wages were rising across the country. A better description of this problem is that there was a massive employment increase in the number of restaurants and hotels facing a smaller talent pool at the same level of eligible employees, and a struggle to find talent capable of representing the ethics of a hotel or restaurant.

The problem and its root

After more than a year hit hard by the pandemic, most restaurants have reopened their dining rooms at 100% occupancy, but a crisis of staff shortages has some restaurants and restaurant owners in trouble. The U.S. hotel industry is facing record labor shortages due in large part to a sharp drop in the number of job seekers and immigrant workers, which, in addition to the pandemic, can be attributed to previous changes in immigration laws, including the suspension of the J1 visa and the exchange visitor program.

Moreover, following former President Trump's 2020 State of the Union address on February 4, AHLA renewed its calls for changes in immigration policy, noting that "the domestic labor market is unable to meet workforce needs on its own" - a statement supported by the president and CEO of Marriott Arne Sorenson, who also criticized the "xenophobic" approach that has come out of Washington in recent years. But all these calls and critics could not protect the industry from the impact of the pandemic.

According to a hotel employee survey conducted by Florida Atlantic University, the global hospitality and tourism industry has a long way to go to recover from the devastating effects of the COVID -19 pandemic. Chip Rogers, President, and CEO of American Hotel and Lodging Association (AHLA) argued that the hospitality industry is currently going through a critical period, with an unprecedented surge in demand, but with the "hottest job market" stretched for a generation, the industry is facing a staff shortage crisis.

Several hospitality workers lost their jobs last year as travel restrictions and quarantine regulations caused most hotels and restaurants to close their doors. Records show that tourism was responsible for more than 4,600 jobs in 2019 in Eau Claire County alone; however, the pandemic has caused the disappearance of most of these jobs.

With the first signs of summer, restaurants and hotels started hiring again, but they are having trouble finding workers. While the pandemic has forced businesses to downsize, former employees have taken jobs outside the hospitality industry. 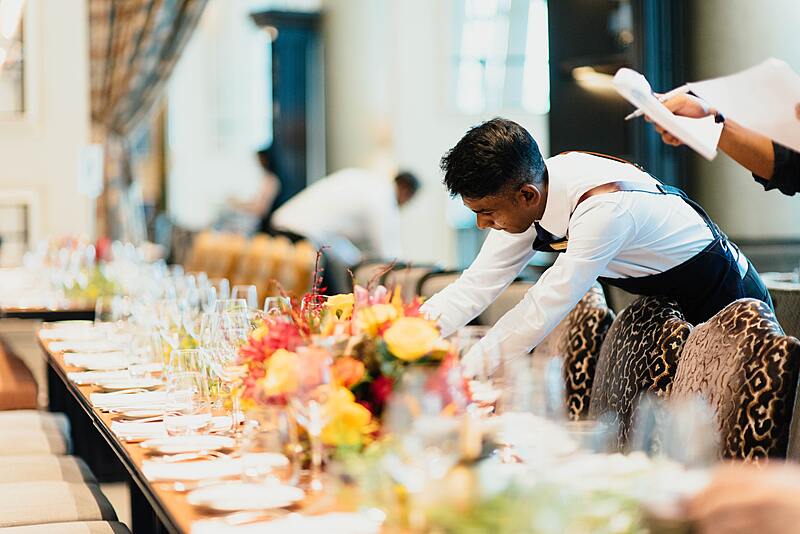 According to Benny Anderson, Executive Director of Visit Eau Claire in Wisconsin, when tourism picks up and recovers faster than expected, it is quite difficult to rehire experienced workers quickly enough and get workers to fill the void.

It's normal for some questions to pop into your head, such as "why aren't people applying for hospitality job openings?" and "are there no job seekers in the United States?" The point is that the U.S. government pays the unemployed up to $978 a week, which is better than most wages offered by most restaurants and hotels, especially now that the industry is just beginning to recover from the pandemic.

In addition, a study by Harri COVID-19 Employee Impact Survey, which collected and analyzed the feelings of more than 8,000 hospitality workers, showed that 73% of respondents were unemployed after being laid off and 75% of workers were displaced indefinitely. This displacement ultimately led to negative perceptions of job security.

Furthermore, to the financial bonus offered by the government that encourages former hospitality workers to stay home, others do not want to return to the industry for fear of contracting the virus, and another group simply chose to leave the industry for the more stable nine-to-five jobs. Nonetheless, the majority of business owners seem to understand the reason for most Americans' reluctance to return to work.

How bad is the crisis of staff shortages?

The Bureau of Labor Statistics has confirmed that the hospitality industry has been hit the hardest by the pandemic compared to many other industries, with a loss of 3.1 million jobs during the pandemic that has not yet returned. This accounts for more than one-third of all unemployed workers in the United States. Nearly four out of every 10 jobs lost in the US since last February were in the hospitality and entertainment industries. In addition, according to a Deloitte study, the U.S. Bureau of Labor Statistics estimated 353,000 job openings in the leisure and hospitality industry in 2009, rising to 600,000 in 2015.

In addition, the number of job openings in 2018 was estimated at 1,139,000, considering that 2018 was a year in which the rate of immigrants to the United States dropped by 70%, which most academics and analysts attribute to changes in immigration policy. Additionally, in 2018, more than one-third of Washington Hospitality Association member hotels cited staff recruitment as one of their biggest challenges.

Figure1: Leisure and Hospitality Job openings for the years 2009 and 2018 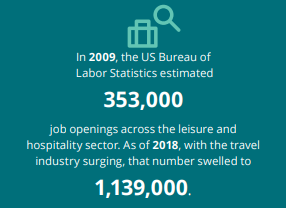 The crisis in the hospitality industry is an opportunity for most foreign nationals who want to start or continue their careers in the United States. Sometimes one person's problem is another person's window of opportunity. With the current U.S. government doing its best to repeal immigration laws and with the reinstatement of the J1 visa program, it only makes sense to encourage foreign workers to take advantage of this opportunity to apply for restaurant work and/or hotel jobs to change their lives for the better.

Plus, this is a win-win solution because not only will it help the U.S. hotel industry fill vacancies and recover, but it will also help foreign students and immigrants gain experience and improve their CVs while earning extra income. In addition, with the new vaccine being made available, health is no longer an issue that can prevent immigrants from traveling. Thus, providing an opportunity for most hotels and restaurants to respond to the staff shortage crisis by hiring foreign workers.

Many foreign nationals outside the US do not know this simple way to enter and work in the United States without hindrance, although it is the most effective and easiest way to improve the acquisition of the best work experience and get a taste of the American dream.

In short, the labor shortage crisis in the United States cannot be solved without recruiting workers from outside the country. Therefore, the United States needs and seeks foreign workers, and it is up to those seeking immigration to act and find a way to apply for a position that fits their career goals and move to Uncle Sam's country.

Do you dream of a career in the hospitality industry in the US? Placement International can help you find the perfect position in luxury hotels and restaurants in the United States, as well as assist you throughout your visa application, acquisition, and arrival in the United States.

Are you interested? Make your dream come true by starting your application process here: https://bit.ly/3ApHM0w

Why is customer service so important?
2533
Monica Ortiz